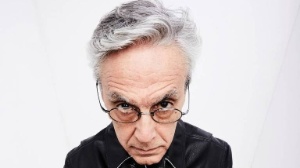 Caetano Veloso sings about a technological world, globalized and connected in “Anjos Tronchos”, his new single, released this Thursday night (16). “Now my story is a dense algorithm/ That sells sales to real sellers/ My neurons have a new rhythm/ And more and more and more and more,” he sings on the track.

He talks about the “blue screens more than blue”, and the “long angels of Silicon Valley”, billionaires who run the big technology companies that are behind the social networks. Caetano cites the Arab Spring, a revolutionary wave of demonstrations in the Middle East that was marked as one of the first to be organized through groups on social networks.

He also says that “leader clowns sprouted macabre”, in a reference to President Jair Bolsonaro, who has the clown Bozo as one of his nicknames. Bolsonaro also rose, as did former president Donald Trump, in a wave of the extreme right linked to fake news — and social media.

The center of Caetano’s poetry is access to personal computers and the internet — and everything that these changes have caused in the world. Between mentions of addiction and the power of control of the billionaires who are behind the networks and the algorithm, the song comes as a salvation, and he ends the song in an enigmatic way, saying that “Miss Eilish does everything in the bedroom with her brother”.

Billie Eilish made her name in 2019 when she burst into the industry and became a global pop star with an album recorded entirely in her parents’ bedroom, alongside her brother and producer, Finneas. It’s as if the singer’s feat puts a counterpoint between the bad events caused by the effects of the ultra-connection provided by the internet and smartphones.

Guided by dirty bass guitars, the song sounds almost entirely experimental, with practically no percussion whatsoever. In what could be understood as the chorus, the guitars sound saturated, and there’s a quick triangle insertion, in what looks like a collage of a forró groove.

Shortly after the song’s release, Caetano said that horrendous things happened in the political life of several societies thanks to the internet. “In our [sociedade] without a doubt, because of the strength of this communication structure that was born with the internet,” he said in a Twitter chat.

In one of the verses of the song, which he said was about the president of Brazil, Caetano says that “leader clowns sprouted macabre, in the empire and in its vast backyards”. “The entire Trump campaign, which Bolsonaro’s was inspired by, was guided by Steve Bannon. This was something that causes this social disease, a terrifying, horrendous aspect of this development of the internet and social networks,” he said.

“I say it happened in the empire and in its vast backyards, because it happened here too, but it happened in the Philippines, Poland, Hungary, and it has its importance everywhere —in China’s intense affirmation, in the almost desperate geopolitical attitude from Russia.”

Caetano also commented that the population now lives “in the flesh” of the consequences of these elections. “Brazil is now experiencing the hangover of this election. The majority of the population rejects Bolsonaro, but he is the president.”

He also talked about the verses that quote singer Billie Eilish. “It’s a good thing too, the fact that such a talented girl makes this neocool from her bedroom, with her brother. Good things about technology, like the highly avant-garde development of funk carioca, its passage through Santos, and implantation in São Paulo through Kondzilla. It’s a whole story that has vitality, strength and beauty too. Now, we have suffered more from the horrendous things that came with it.”​

“Anjos Tronchos” will have a video clip next Friday, starting at 8pm. the new song of Caetano will integrate “Meu Coco”, the singer’s next unreleased album, which was recorded in the first half of this year and is scheduled for release in October.

It is Caetano’s first album in almost ten years, following on from “Abraçaço”, which came out in 2012. “’Anjos Tronchos’ is a song that ended up getting extremely dense. We live today immersed in a sea of ​​algorithms, diverse possibilities of social networks and technological devices that advance very quickly”, said the singer-songwriter in the publication with the announcement of the single’s release.

Caetano releases “Anjos Tronchos” right after come back from a tour for the Europe. According to the journalist Mauro Ferreira in his G1 column, Caetano’s new album has 12 tracks, “Pardo” was already recorded in 2019 by the singer Céu, “Noite de Cristal” came out in 1988 in the voice of Maria Bethânia and “Autoacalanto” was sung in a live. All are compositions by the Bahian that he never recorded.