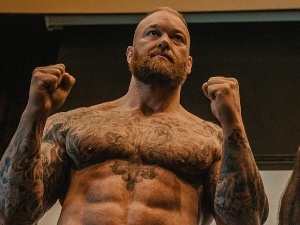 Icelandic Hafthor “Thor” Bjornsson, who played the character Gregor Clegane in the Game of Thrones series, hit the weight and confirmed his boxing match against Canadian Devon Larratt at the Core Sports Fight Night 3 event. , and will be broadcast online.

Bjornsson has lost around 55kg over the past few years by changing his diet and lifestyle to focus on boxing. He hit 146.5kg at the official weigh-in, while Larratt weighed 124kg.

The 32-year-old Icelander had been preparing to face Eddie Hall, but his rival was cut out of the fight after suffering a biceps injury during training. Thus, Larratt, 46-year-old arm wrestling star, was slated to face Bjornsson.

After weighing, the two faced each other, but showed respect, without much provocation.

This will not be Bjornsson’s first experience in boxing. He had two exhibition matches in 2021, against Steven Ward and Simon Vallily.