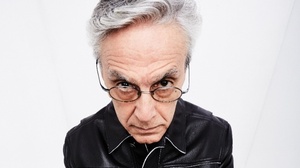 “Long Angels”, song that he has nothing to do with a beam, is the new creative impetus of Caetano Veloso.

It is an unprecedented track, a solo album that will succeed the already old and still brilliant “Abraçaço”, 2012 album.

Composed by Caetano, the track is designed by a dirty and gloomy guitar signed by Pedro Sá, musician and producer who accompanied Caetano as part of the band Cê – the youth group that recorded with Caê the rejuvenating albums “Cê” (2006), ” Zii and Zie” (2009) and the aforementioned “Embrace”.

Caetano’s new single has something rocky that seems to have come out of the days of “Cê”, especially in the song’s most melodic and less somber moment, when the lyrics are about the Arab Spring.

The track will be part of the album “Meu Coco”, to be released later this year and, according to the artist’s new label, Sony Music, will offer a journey inside the head of this figure in Brazilian popular music.

“Now, my story is a dense algorithm”, says the Bahian. Yes, Caetano now targets the internet.

Caetano is brilliant when he wears the “now” scholar’s gown.

His best albums are like that, landmarks of time, tellers of Brazilian history through verses that are sometimes poetic, sometimes fierce, sometimes candid.

Each one of them, from beginning to end, helped to understand what was happening in Brazil and in the world.

With “Anjos Tronchos”, Caetano looks at the internet in its entirety: the toxicity of networks (“A vile post can kill”), the dangers of fake news and the politicians created from them (“Leading clowns sprouted macabre”), as Jair Bolsonaro e Donald Trump, arising from the sewers of lies.

Finally, he praises the existence of Billie Eilish (the so-called “Miss Eilish”), who thanks to the connectivity of things can create great songs without leaving her room, in the company of her brother.

Everyone has been toxic on the networks. Even Caetano

Well, Caetano Veloso discovered that the internet is toxic.

Not that he didn’t already know it or had lived it through his skin, in different ways.

In 2011, ten years ago, for example, web journalism reached the point of reflection with Caetano at the center of the discussion because of the publication of the news “Caetano parks car in Leblon this Thursday”. UOL marked the decade of this fact in a text by who was on the Terra portal at the time, the current editor Osmar Portilho.

But Caetano was also on the other side, the one he attacks.

In 2020, for example, he attacked Rolling Stone Brasil in an Instagram post because of a text about the historic and award-winning live from Drop at Globoplay. The publication showed an extremely unhappy lack of knowledge about the musical culture of the dish-and-knife of Bahia’s Recôncavo (as well as other equally important vehicles, it is worth remembering, but which were not targeted at the time) and generated a huge debate on culture and journalism musical as a whole.

Caetano, at the time, did not show the empathy that we are looking for so much on the networks – and I write this without passing the line on any journalistic vehicle that abominably scraps the information chain.

But the publication generated a tsunami of hatred that spilled over into the most fragile part of this story – that of those who wrote unhappiness on a Saturday on duty – instead of hitting where it really mattered, the part that figures at the top of the chain and the only one capable of promoting any change.

Did it make sense? Of course, that post also reminded Caetano’s followers that the said live would be available on Globoplay for a few more days.

Networks are so toxic because hate generates more engagement than love.

And this algorithm, which is not really intelligent, does not understand that what is “hate”, only counts “likes”, “views” and “shares”.

This columnist, even, is attacked daily on the networks. And he spends what he gets on therapy to deal with so much gratuitous hate message. Admittedly, I’ve also unnecessarily spewed hate around.

A chronicler of the present, Caetano records tension and joy in simple or ardent poetry. But he always acts as if he were pointing to a reflection and asking for changes.

In the perspective of the future, when we look at Caetano’s discography as we do today with albums from the 60s, 70s and 80s, we can think: “Wow, at that time, the internet was terrible. Thankfully, everything is fine today. “

The name of Caetano’s new album will be “Meu Coco” and, in addition to “Anjos Tortos”, the album will have 12 tracks, as reported by columnist Mauro Ferreira, from G1. Songs like “Pardo” (recorded by Céu in 2019), “Noite de Cristal” (Maria Bethânia, in 1988) and “Autoacalanto” (a song already shown in a live), never recorded by him, should be in the new work .

The track was released on digital platforms on Thursday (16) and now has a clip, at 8pm.