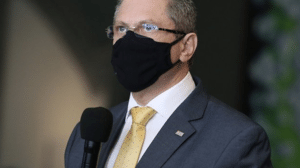 The State Secretary of Health of São Paulo, Jean Gorinchteyn, said today in the UOL News that only 0.001% of adolescents vaccinated against the new coronavirus in the state had some adverse effect because of the application of the immunizing agent. According to him, the state has so far vaccinated 2.4 million people between 12 and 17 years old.

“We had 35 notifications, seven of them with a serious event, including a very serious one. We are evaluating these serious effects. For example, extreme drowsiness would not be included in the highest severity criteria, but anyway, it was notified by the municipality in question,” said the secretary.

Gorinchteyn’s statement takes place in the midst of controversial decision by the Ministry of Health to go back on the recommendation to vaccinate adolescents aged 12 to 17 who do not have comorbidity. By justifying the guidance given to states and municipalities on the issue, the minister of Health, Marcelo Queiroga, quoted, at a press conference yesterday, a death in São Paulo.

We have no subsidies to say that the vaccine is responsible for this condition of death. We follow up on all patients who experience an adverse event. In this case, this is a very serious adverse event, and the manufacturers of the vaccine itself are also accompanying them, who have every interest and responsibility in obtaining this information
Jean Gorinchteyn

The secretary also said that he cannot confirm the information given by the ministry that adolescents are being vaccinated in the country with doses of immunizing agents not approved by Anvisa (National Health Surveillance Agency) for that age group. Until now, the agency released the application only of Pfizer’s vaccine in this group.

At yesterday’s press conference, the Ministry of Health said that more than 26 thousand doses of vaccines that were not authorized for teenagers in the country were applied. Of these, 6,921 would have been in the state of São Paulo alone, being 2,356 from AstraZeneca, 4,464 from CoronaVac and 92 from Janssen.

“I disbelieve this information, but I need, as a public manager, to open an investigation so that we can investigate the fact. If this occurred inadvertently, those people who applied will be duly punished, and those who received immunizations will be duly monitored in the next few 30 days and will also have all the guidance for receiving another immunizing agent in the second dose,” said the secretary.

Gorinchteyn even criticized the ministry’s new recommendation. The secretary said that Pfizer’s vaccine is applied to teenagers from countries like Chile, Canada, United States, Italy, France, United Kingdom and Israel.

It becomes anecdotal for us to suspend this in the country. This is an extremely irresponsible action and disqualifies not only this vaccine but the other vaccines that were already being disqualified by the concepts placed between the lines and, therefore, discrediting the population in our vaccination
Jean Gorinchteyn

Yesterday, after the Ministry of Health released the recommendation for the suspension, the governor João Doria (PSDB) said that the state of São Paulo will continue to vaccinate teenagers. Gorinchteyn defends Doria’s position citing the National Immunization Program (PNI).

“We won a National Immunization Program that got the support of the population and that is what makes us come back and resume in the new time. That’s why we have to enshrine respect and credibility to our immunization program,” said the secretary .