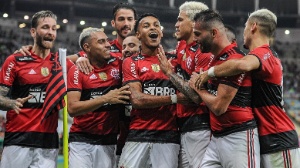 Mauro Cezar believes that “no one is right” in the imbroglio created between Flamengo and other clubs due to the presence of the public in the stadiums. In the frame “Fala, Maurão”, the columnist of UOL Sport points out which mistakes have been made by both parties.

“In the imbroglio between Flamengo and the other clubs, what is very clear is that no one is right. Does Flamengo have the right to claim the presence of the public in their games? Yes. ‘Oh, but the others don’t want to.’ stop this hypocrisy of isonomy”, he says from the 4min36 of the video above.

“The clubs take care of each of their interests. Flamengo seeks its objective. If the others don’t agree, then it’s the other’s problem. And this is not a situation that has to be voted on. In Serie B, the cruise he’s been playing for two rounds with an audience. This transition will have to happen”, exemplifies Mauro Cezar.

“There is an obstacle. The teams from São Paulo do not want the public to return for a very simple reason. The governor of São Paulo made it clear that, before November, there will be no public in the soccer. So if I can’t have it, you won’t have it either,” he adds.

In the video, Mauro Cezar cites examples of other actions by clubs that did not have the support of others and says what the Rio club’s mistake has been throughout the imbroglio.

“Flamengo pushes the bar and acts in a wrong way in relation to the game with the Guild, because the first game did not have an audience. Flamengo should have played this game without an audience and try, in the next phase, to seek an agreement with their opponent. It would be more reasonable,” he says.

“In this discussion, everyone wants to take advantage: Flamengo, forcing the bar to put their fans, and the others, trying to prevent it because they know they won’t make it right now. Everyone wants to get the hots for their sardines,” he concludes. .